Writing is central to Kim’s interdisciplinary work and she increasingly approaches publishing as artistic practice. Kim is widely published across genres and is currently focused upon book projects of creative non-fiction.

Kim started her career in the late 1990s as a news journalist - first in radio, then online and in print journalism, notably as news editor for a specialist weekly in the Financial Times Business group in London. Before that, she helped set up and ultimately manage a bespoke online news service at the same media house. She moved freelance to write on broader topics and to attend art school, and has refocused since then on long-form narrative. During that time she has written for a broad spectrum of publishing platforms on a versatile range of subject matter and narrative genres - from journalism news, analysis, feature articles and profiles to more reflective essays and opinion pieces. Some writing samples, below, bring some of this range to life. 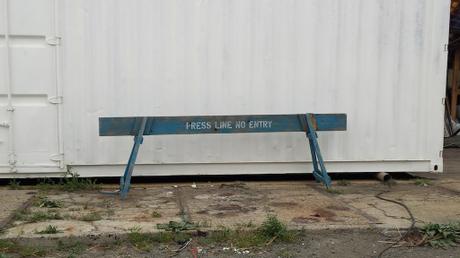 *Gurney, K. 2022. After the fall: An Art of the Commons. In: Shuddhashar, Issue 27, February 1.
*Gurney, K. 2021. The mogul, his meerkat and the meerkat’s second life. In: e-flux Architecture. ‘Workplace’, a collaboration between between e-flux Architecture and the Canadian Centre for Architecture within the context of its year-long research project Catching Up With Life. Edited by Nick Axel, Albert Ferré, Nikolaus Hirsch, Megan Marin.
*Gurney, K. 2021. DIY institutions, artistic thinking and common space, Barcelona: CCCB.
*Gurney, K. 2021. Kicking Dust: Communal pathways as works of art,In Review, Editor: Keely Shinners.
*Gurney, K. 2020. Green Screen - A digital storymap of creative nonfiction that follows the life of a film set assembled for a commercial to tell a larger story about counterfactual imagination and city futures from the artisanal perspective of the workshop floor.
*Gurney, K. 2020. The second lives of zombie monuments. In: Africasacountry. This article is about the performative afterlife of the voided plinth of the toppled statue of Cecil Rhodes.
*Gurney, K. 2020. Artists help us leap into the unknown. In: Africasacountry. An article about how artists navigate uncertainty.
Gurney, K. 2019. From End to End. A Storymap of Viral Sculptures. This digital storymap (geolocation, visuals and text) follows the surprising trajectories of a series of star-shaped sculptures from a Johannesburg studio into private and public settings as part of a broader study on art as a vector of value.
*Gurney, K. November 2015. Re-imagining Africa’s Cities. In: Ogojiii, Issue 03, Nairobi and Johannesburg: Ogojiii, pp. 43-49.
*Gurney, K. December 2015. Performing the Present: The Second Life of Zombie Monuments. In: Art Africa, Issue 02, Cape Town: Bell-Roberts, pp. 14-17.
*Gurney, K. with photographer Sydelle Willow Smith. February 2015. The Doppelgangers. In: Cityscapes, Issue 6. Download printed article pdf or access the website version. This article, about Hasan and Husain Essop, successful fine art photographers who collaborate together and take Cape Town as part inspiration for their fine art photography practice, shows the close imbrications between space, identity, politics, and imagination in a city where spatial inequality is still a defining feature. The article was written for an ACC exhibition about Cape Town, City Desired.
*Gurney, K. with photographer Sydelle Willow Smith. February 2015. The Conservationist. In: Cityscapes, Issue 6. This long-form nonfiction piece profiles Luzann Isaacs, who manages an ecologically sensitive urban wetland park in a most unlikely setting - surrounded by industria, a township, and a freeway, and notorious for neighbouring Cape Flats ganglands. Most strikingly, it has no fence and must negotiate its presence with dialogue and reciprocity justifying its value and indigenous knowledges. This article formed part of a series for a multimedia exhibition by ACC on Cape Town, City Desired. In: Cityscapes, Issue 6. Download printed article pdf or access the website version.
*Gurney, K. with photographer David Harrison. 2014. Edge Design: Urban form and social change in Khayelitsha and Dunoon, reflected upon through the issue of sanitation.. In: Cityscapes. Issue No. 5, pp. 34-49.
*Gurney, K. Ethnography of a flame - Critical Arts: Under fire section, 2013. In: Critical Arts: South-North Cultural and Media Studies, 27(4), pp. 439-443.
*Gurney, K, with photographer Delwyn Verasamy. Winter 2012. A Visionary Statement, reportage on the contested notion of Johannesburg as a ‘world class city’, a behind-the-scenes take on where such notions come from and what they might mean. In: Cityscapes, Issue 2, pp. 56-71.
*Gurney, K. 15 January 2012. Muted Tones: the evolving life of distressed musical instruments. This article takes inspiration from damaged musical instruments, largely pianos, reconfigured into surprising and unforeseen second lives. In: CCTV, a zine for local ideas in global practice. Vol 1. no. 1 Launch Issue, August 2012. Rangoato Hlasane (curator): Johannesburg. Download. Originally published as Life of a Piano in Sunday Independent.
Gurney, K. 2012. The Fractured Public Interest. In: Rhodes Journalism Review, Issue 32, p.8.
*Gurney, K. with Scott Johnson. Digging up the Dirt. Investigative news feature on the search for South Africa’s politically ‘disappeared’ - Newsweek International.
*Gurney, K. September 2011. The shifting private-public axis. In: Rhodes Journalism Review, No. 31.
*Gurney, K. Sep 2006. James Webb: Take nothing for granted. In: Business Day Art Supplement, p.14.
*Gurney, K. Sep 2006. Peter Clarke: The poetry and music of everyday. In: Business Day Art Supplement, p.13.

Available via Motto Books and Amazon.com.

Launch party in Cape Town & Johannesburg - details to be announced via African Centre for Cities.

‘Panya Routes’ is the result of a four-year research project, Platform/ Plotform, into the working principles of independent art spaces in five fast-changing cities: Nairobi, Accra, Cairo, Addis Ababa and Dar es Salaam. It makes correlations between art and the urban everyday to convey shared ideas around horizontality, second chance, performativity, elasticity and convergence. In short, it’s about DIY-DIT institution building as artistic practice, or doing things with art.

The text considers how independent spaces deal with uncertainty and flux, and what other institutions can glean from long-standing platforms built for purpose not profit. It also reflects upon how these platforms act as urban indicators and as vectors of futures thinking. For researchers, there is a section on method and a collation of allied texts on the subject matter.

The key spaces that participated in the research were: GoDown Arts Centre, ANO Institute of Arts and Knowledge, Townhouse Gallery, Zoma Museum and Nafasi Art Space. The book includes elegant maps designed by Bella Knemeyer that situate these spaces in their urban context, some fieldwork visuals by the author, and a visual essay. The book is designed by Márcia Novais to give artistic form to the content matter, and is edited by Mika Hayashi Ebbesen. 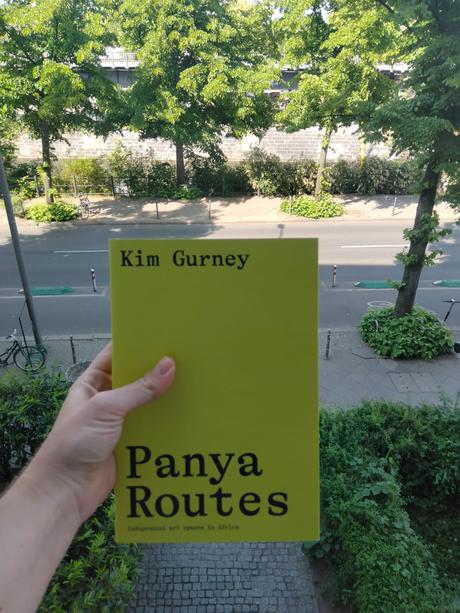 “Gurney’s book deserves conversations with works on independent art spaces in Asian cities, where they have also been an important development in the last two decades. Gurney’s documentation and analysis are pioneering, and should inspire colleagues in Asia, because they are crucial in furthering the critical role of arts in contemporary dramatic transformation of their cities.” Marco Kusumawijaya, urbanist, Jakarta

“In an engaging analysis of five African independent art spaces, Kim Gurney convincingly highlights the powerful artistic and political potential of such autonomous art initiatives: to formulate novel propositions that creatively engage with the continent’s varied social realities; to redesign its material realities; to innovate the contents of what constitutes its public spheres; and to generate imaginings of alternative futures that bypass the tired discourses and practices of institutionalized political levels in order to embrace more inclusive and collective modes of living together. ‘Panya Routes’ is an original, hopeful and timely reflection on the role of public art to rethink urban worlds in Africa and beyond.” Filip De Boeck, co-author of ‘Suturing the City. Living Together in Congo’s Urban Worlds’.

This creative nonfiction book about Johannesburg tells the story of an innercity building during a time of transition. August House, a former textiles factory (b. 1946), functioned for a decade as an atelier but at time of writing had just been put up for sale and all its tenants had to relocate. The narrative is woven by following various artworks made in the building’s midst during this time of uncertainty and change, and their imbrication with a host of the building’s residents. It is a narrative of beginnings, endings and never-endings - a series of micro stories that tell a macro tale about what was ‘august’ about August House - or why art matters, and the seismographic role it plays in an ever-changing city like Johannesburg. Book launch flier pdf

A digital storymap, ‘From end to end’, visualises this book through geolocation, images and text. The storymap closely follows one of the book’s storylines: the journey of a series of artworks created by Gordon Froud, Cone Virus, travelling from place to place as vectors of artistic thinking. It also elaborates upon the book’s formal and conceptual architecture.

The book is available from The Book Lounge, Love Books in Johannesburg, or the author directly on kimjgurney[at]gmail.com 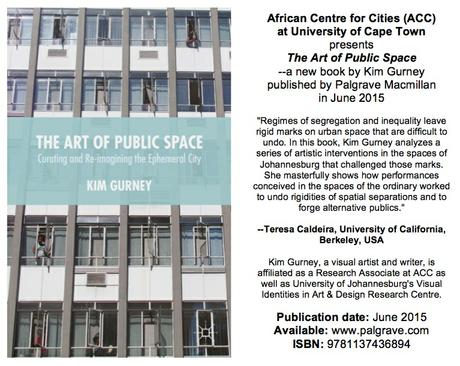 This monograph follows the manifestation of a trilogy of performative interventions in Johannesburg during 2012 that variously explored public space. Shoe Shop engaged public space through walking and ambulatory thinking, Amaze.Interact through gaming and ideas around playing the city, and Spines leveraged the city’s transport lines with two parallel performance art projects: United African Utopias took participants on a fantastical walk through the city with a narrative script that among other things employed pirate radio and costumed guides to re-imagine reality; and In House activated domestic and hybrid spaces of enclosure as common grounds of potential encounter. The book reflects upon this Goethe Institut project, New Imaginaries, relative to a broader public sphere and puts forward ideas relating to the commons.

*The book is available from Palgrave, Amazon, and Nook. It is available from Palgrave as a physical book or an e-book, and in separate digital chapters. For educational or research purposes, email the author directly.
*Chapters in Abstract form: Download.
*Preview feature by Michael Morris about ‘The Art of Public Space’ published in the Weekend Argus (21 June 2015)
*Review published by London School of Economics’ Kate Dawson (May 2016)
YouTube link to a short documentary commissioned by Goethe Institut on New Imaginaries

A symposium was held as part of the research leading to the above book. ‘New Imaginaries, New Publics’:
-Download programme of speakers
-Download event Rationale
Video recordings of the presentations are available upon request (email kim).